The Jolie Pez Project: The Jolie In Hoboken And Manhattan

Everyone’s favorite action figure returns to, well, action. The Jolie’s Hoboken and Manhattan adventure was hosted by Elly, who writes (and sings) the top notch blog Buggin’ Word.  Buggin’ Word is a fun blog every post, but especially on Fridays when Elly plays the ukulele and sings. Her ukulele playing has been mentioned in the same breath as uke virtuoso Jake Shimabukuro.

When we last saw our heroin…heroine?…er…The Jolie, she was off gallivanting on a beach with some swarthy, well-tanned types who were clearly up to no good because… 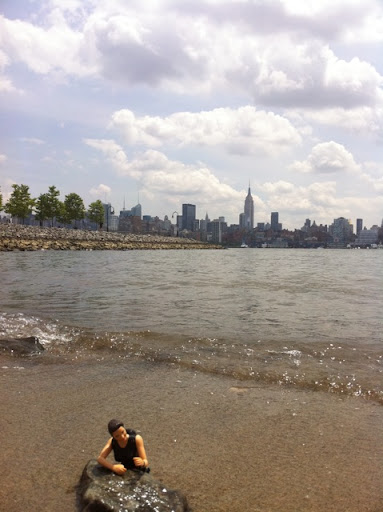 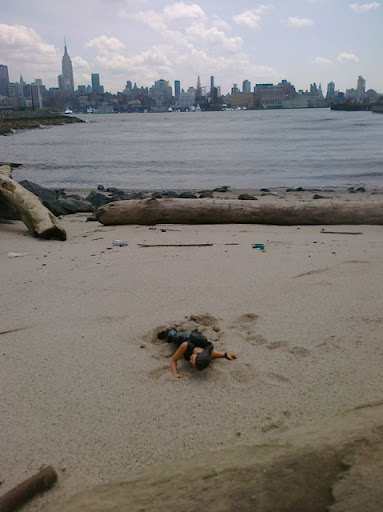 “Is that Manhattan?  How the hell…” 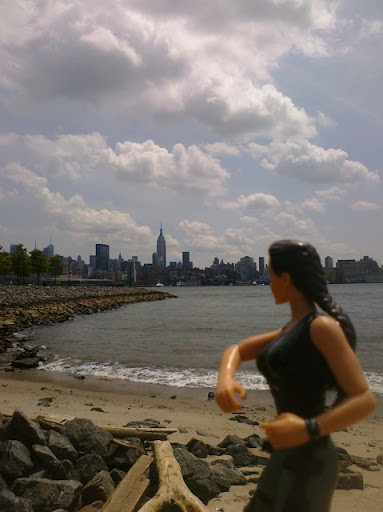 “I must be in Jersey somewhere, right?” 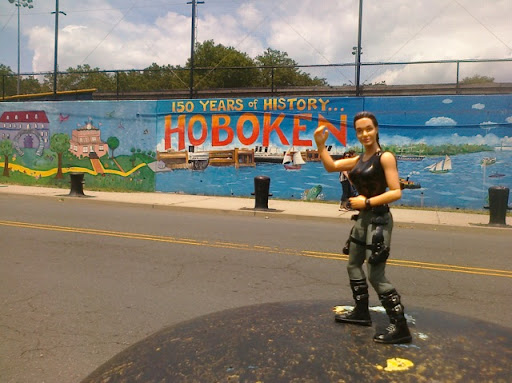 “Now how the hell am I going to get over to New York without exposing myself to more of those horrendous toxins in the Hudson river?
“Hmmmm….” 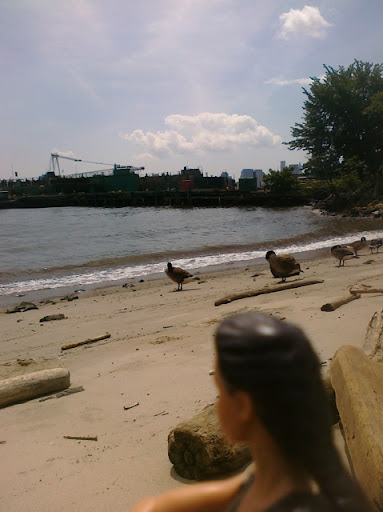 “Yup, I can totally ride this bitch.  In the immortal words of Warren G., regulators – mount up!” 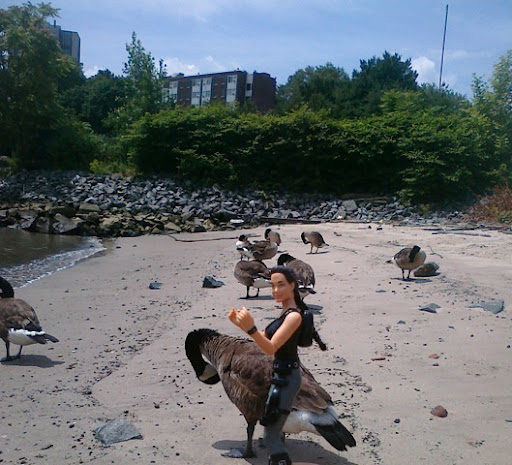 After landing in Manhattan, The Jolie braves Times Square. 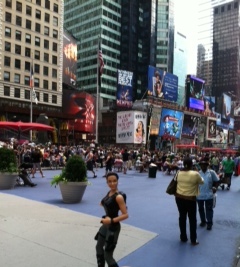 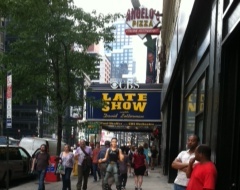 She continues on to Columbus Circle and emulates the tourists and their cheesy photos. 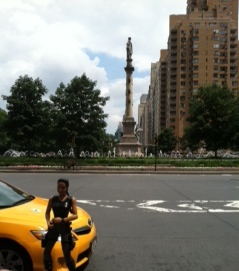 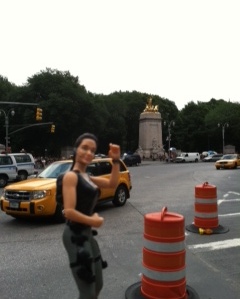 Always wanting to show she’s not just a pretty face, she works in a little Ayn Rand reference to show Brad later. 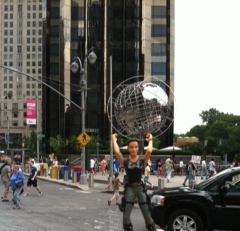 But then, inside the mythical glass tower labeled One Columbus Circle, she happens upon the giants. 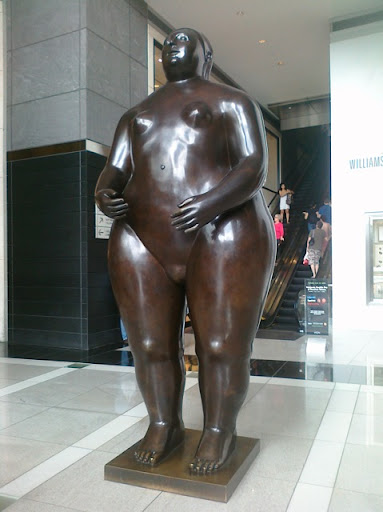 Fearing the Whole Foods beneath them could never satiate their savage appetites, Jolie thinks fast and distracts the male to avoid becoming dinner. 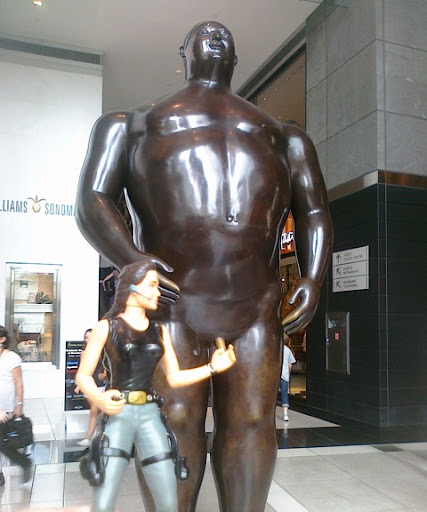 Back on the hard streets of NYC, she decides to take in a Broadway Show.
“What do you mean the show is sold out!  This thing has been running for ever!!!” 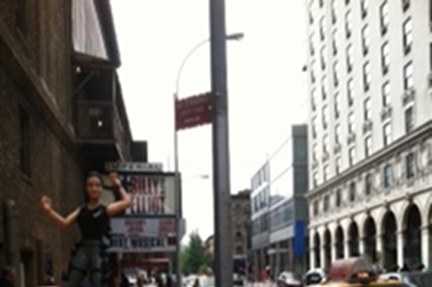 “Why I’m so mad I could just….”
Monster Jolie inflicts her mighty wrath on the citizens of New York. 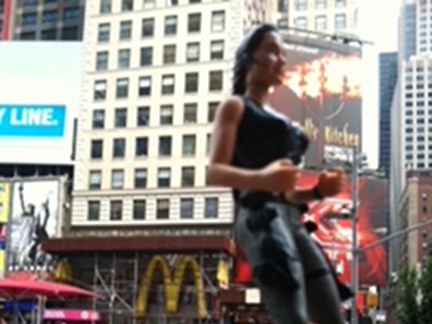 …and so she ascended the Empire States Building to rain down her fire and anger and unrequited love of theater. 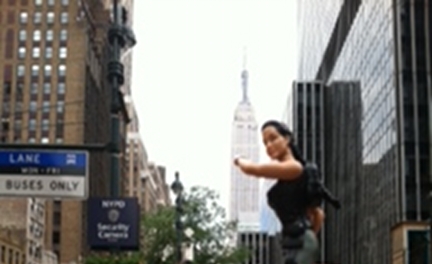 She should probably watch more movies though, because we all know this ends with helicopters and a distraught Faye Wray.

A little behind the scenes fact – Elly produced this Jolie adventure while in the midst of moving from the area. She also had to pry the photos out of a phone that died in the middle of the adventure and wouldn’t give up the pictures. Thanks to Elly and Buggin’ Word for having The Jolie stop by.

The Jolie’s next adventure (coming soon) will be in Boise, Idaho. Let me know if you want to get on The Jolie’s ever growing list of places to visit.

30 Comments on “The Jolie Pez Project: The Jolie In Hoboken And Manhattan”