The Jolie Pez Project: The Jolie In Atlanta

The Jolie left New Orleans and headed north-ish to Atlanta to spend some time with Lenore, Rob and their family. The Jolie’s brave hosts took on the dangerous combination of The Jolie, Guinness and venturing inside the Atlanta perimeter. Let’s join them, shall we? I think we shall.

Jolie arrived safely, excited to show off the bling she picked up while in New Orleans, celebrating Mardi Gras. 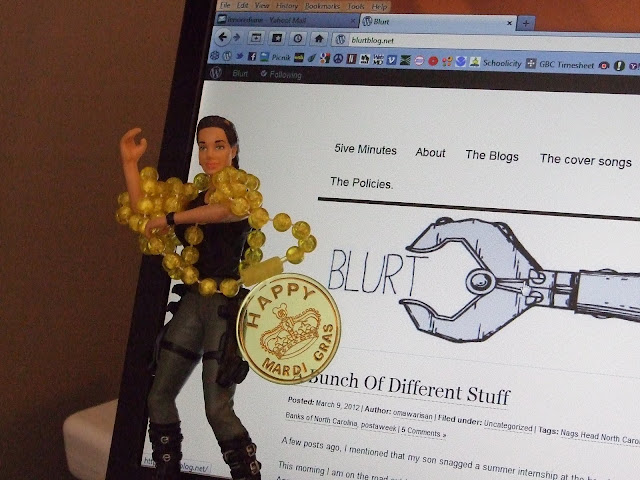 Arriving just before St. Patrick’s Day, we wanted to take Jolie out for a pint of Guinness at a local Irish pub. I had no idea how much Jolie liked Guinness until she made it clear she was going to fight me for the pint. 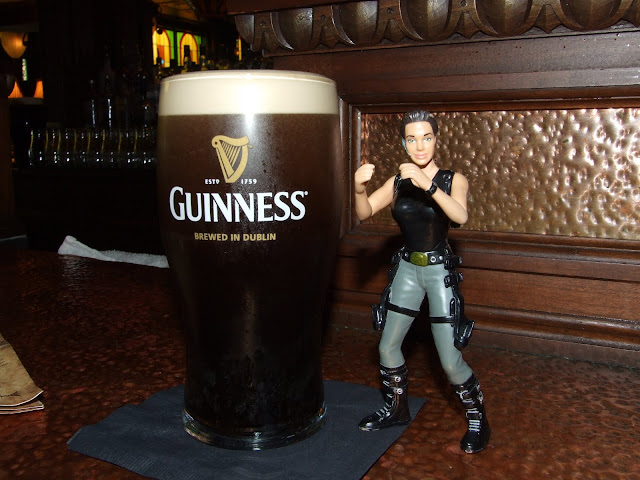 She sucked that sucker down in no time. I told her I was offended, letting her know a Guinness is to be savored not sucked. Newbie. 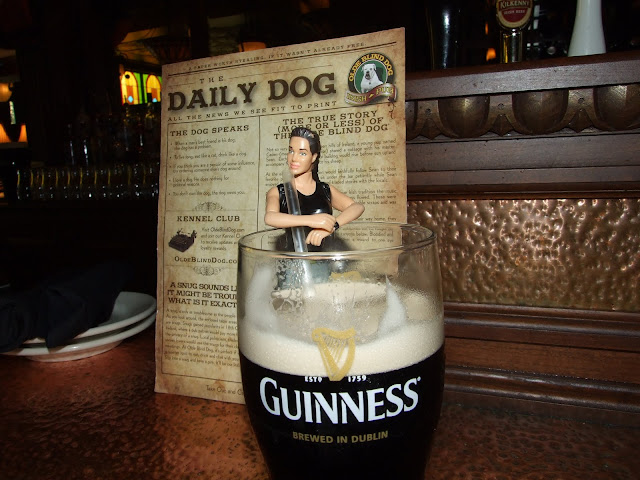 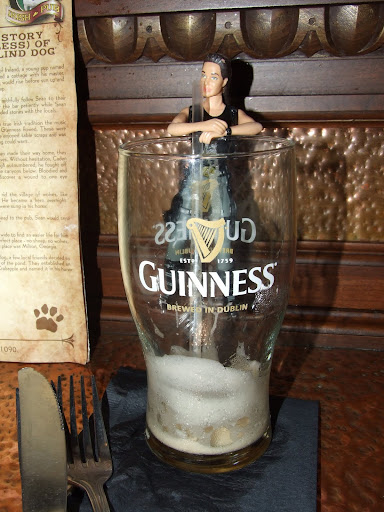 After a good night sleep, recovering from her travels, we loaded the car and headed to Atlanta. We told Jolie we were going to stop at the Big Chicken on the way into town. She thought we were talking about her ex, Billy Bob Thornton, but I assured her we were talking about a real chicken. (Well, as real as Jolie.)

The Big Chicken was built in 1963, and he is a Marietta, GA landmark. 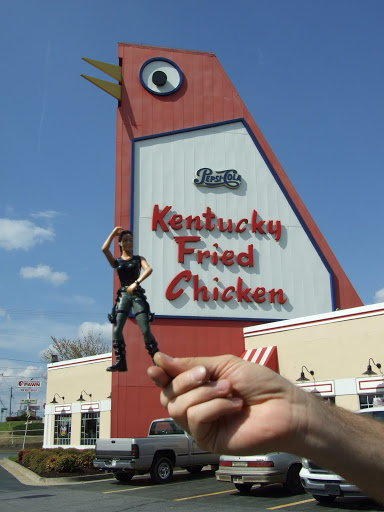 After gawking  at the chicken, we headed to Hotlanta.

Rob, seemingly taken by Jolie, wanted to show her around his alma mater, Georgia Tech. So, with Rob at the helm, we walked all around the GA Tech campus. 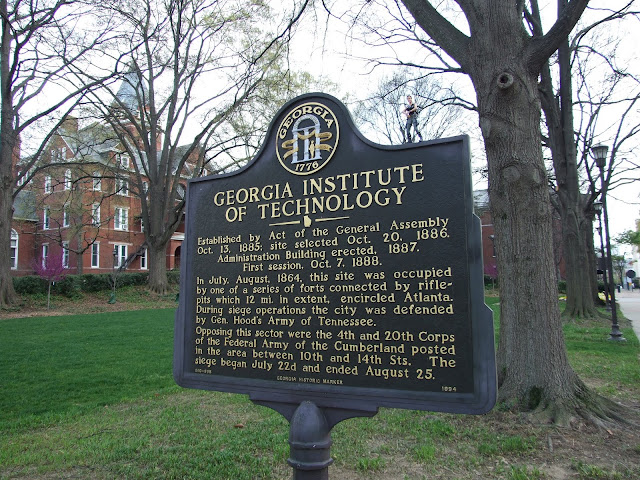 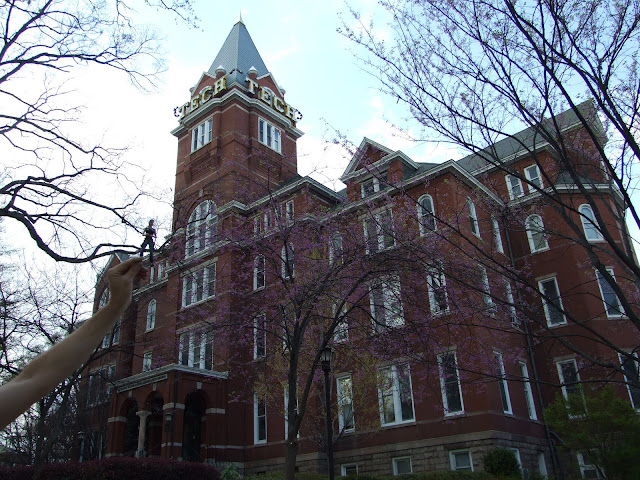 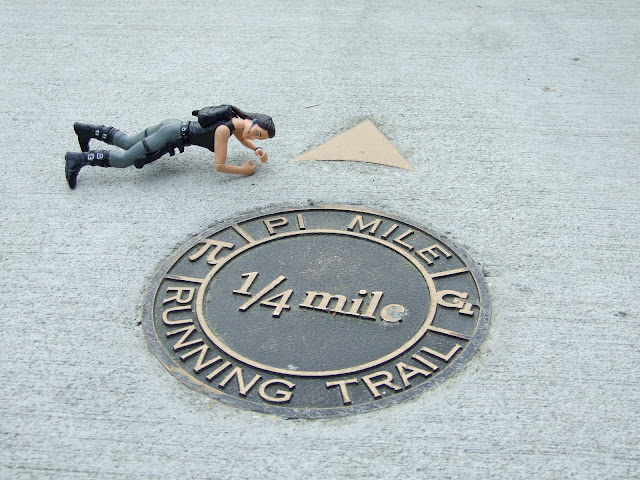 To refuel from the walk and run around the campus, we headed to The Varsity for some greasy good food. The Varsity was established in 1928. Walk in to The Varsity, and you’ll hear the folks behind the counter yell out, “What’ll ya have?” If you are in Atlanta, grabbing a bite to eat at The Varsity is mandatory. 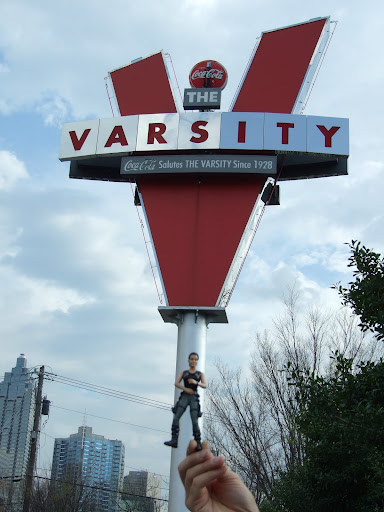 Jolie had a veritable plethora of Varsity goodness. 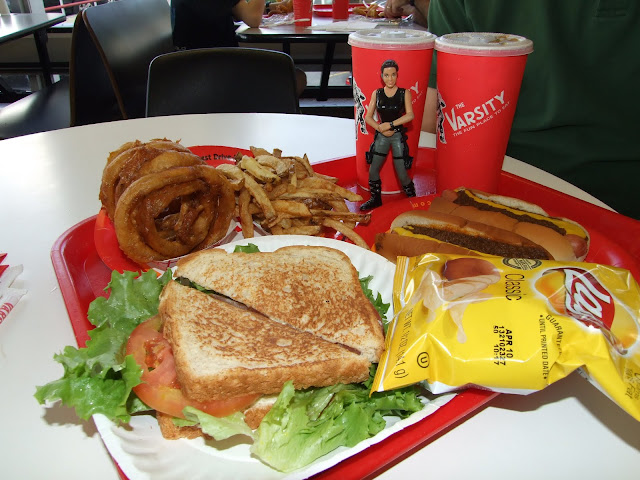 Later, she was embarrassed by her appetite. 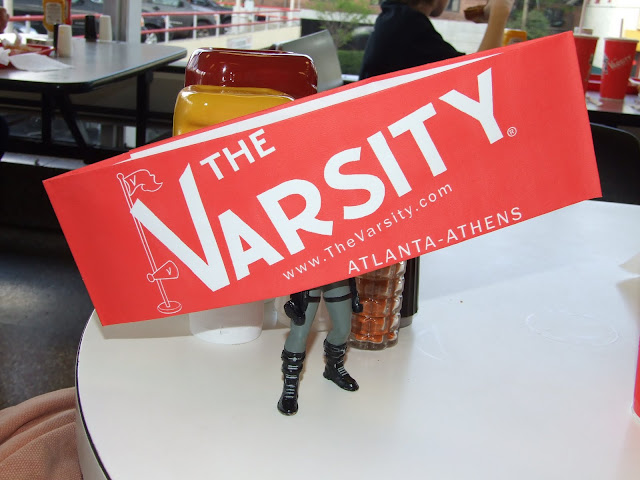 We wanted to walk off the food, so we headed further into town. Here, we stopped by The Fabulous Fox. 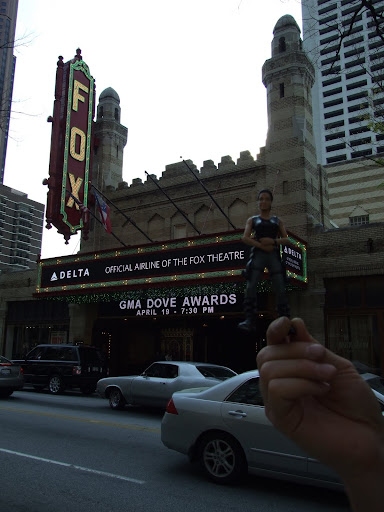 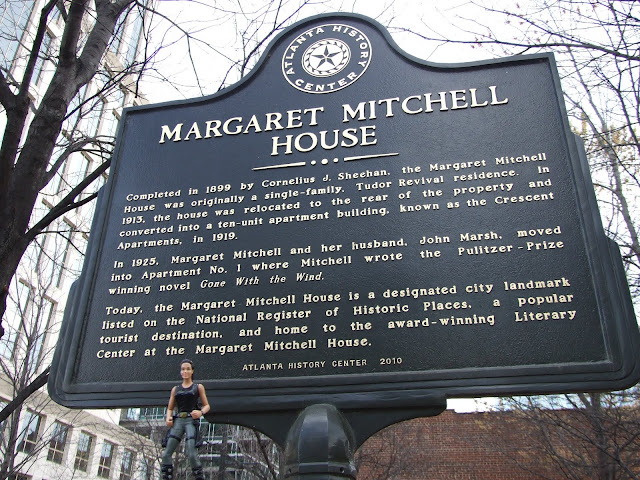 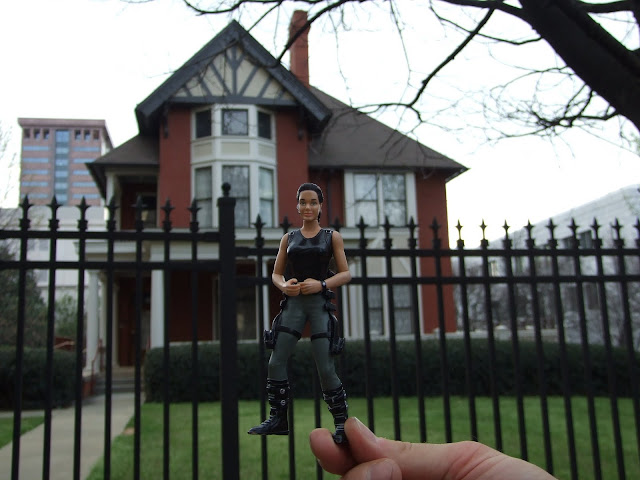 Afterwards, we went to the Oakland Cemetery to see where Margaret Mitchell was buried.
The first stop was at the Visitor Center within Oakland Cemetery. Jolie wanted to get a shot with the books, etc. 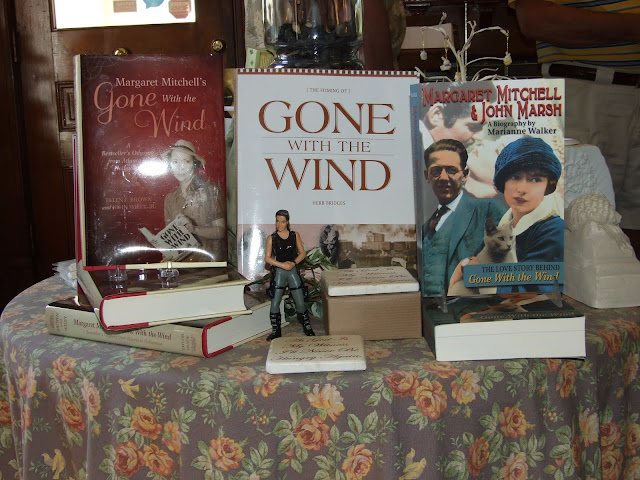 Then it was off to find the tombstone of Margaret Mitchell. 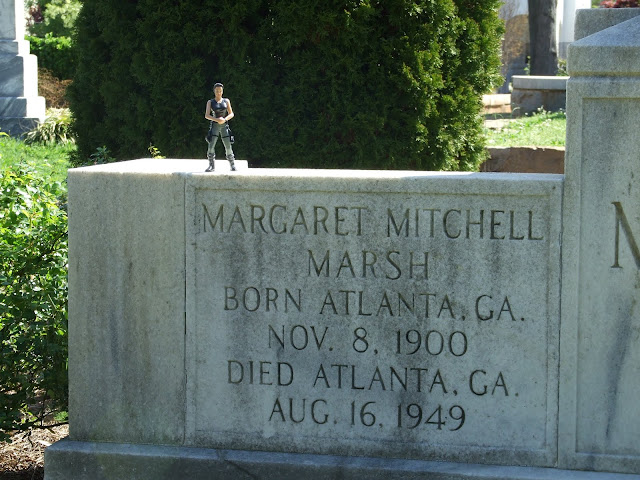 Before we left the cemetery, we paid our respects to the great golfer, Bobby Jones. Notice the golf balls left in honor of Mr. Jones. 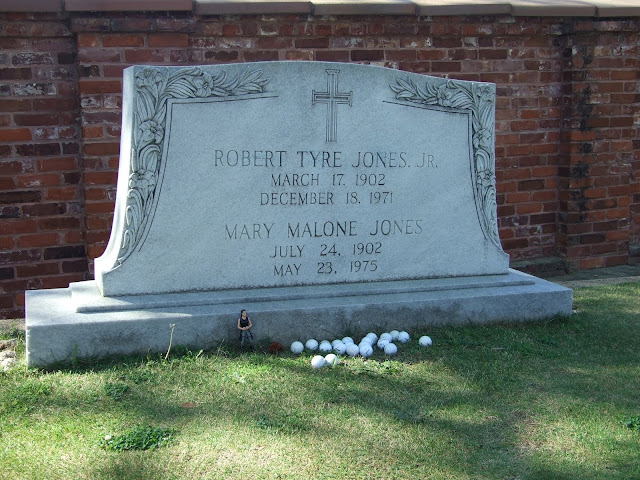 Thirsty from our walk through the cemetery, we decided to hit a local watering hold in Little Five Points, an eclectic town in Atlanta. However, before hitting the watering hole, Jolie wanted to get a picture with Skull Man, keeper of The Vortex – an awesome hamburger/beer place. 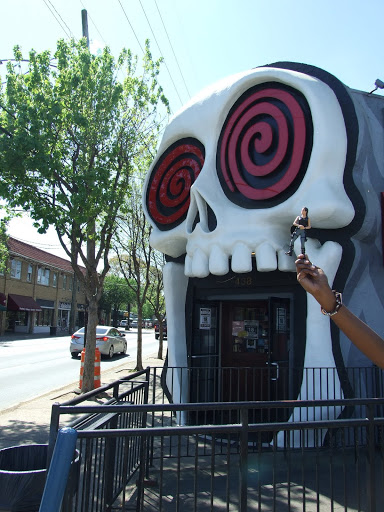 While at the watering hole, Jolie enjoyed the water, while I enjoyed a Guinness. I kept her paws off my pint. 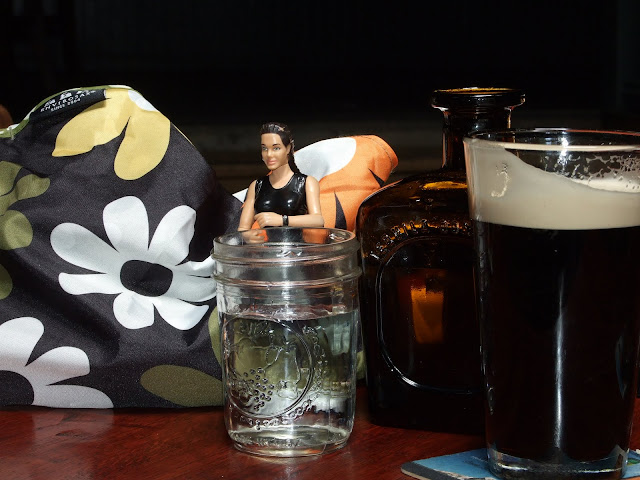 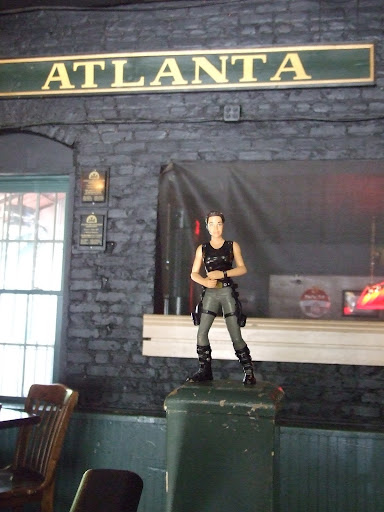 With the afternoon turning into early evening, we decided to venture home. Never wanting to take the same route twice, Jolie asked if we could go a different way home. I obliged, knowing I would be able to show her the King and Queen Towers just outside the perimeter (I-285). 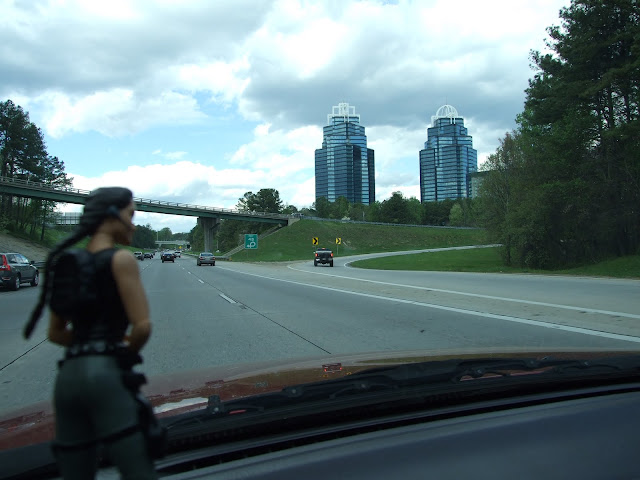 We enjoyed having Jolie stay with us. I was a bit disappointed she did not want to spend time with our kids. Several times, we tried to get the three to play together, but it never ended well.

The day we were ready to take Jolie to the airport, we were delayed, because she was nowhere to be found. We combed the backyard, fearing the dogs had gotten hold of her. Thankfully, we found no signs (or body parts) of Jolie.

Finally, our son confessed. He had grown tired of hearing Jolie go on and on about the awesomeness of her kids, and he didn’t want to listen to her anymore. So, he put her in a toy bin. 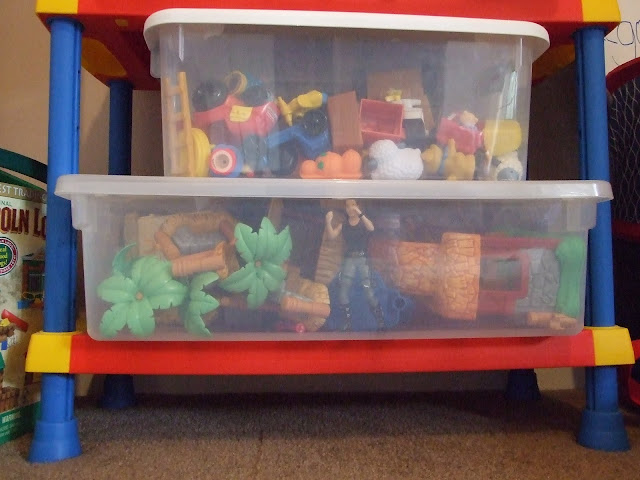 We are so sorry, Jolie. Really. We hope you’ll come back and visit us again. And Oma, thank you for trusting us with Jolie. We had a great time!

No, I am sorry Lenore. I should have told you The Jolie gets a little aggressive around Guinness. Thank you so much for risking so much to show The Jolie a great time! The Jolie is now off to the Virgin Islands!

13 Comments on “The Jolie Pez Project: The Jolie In Atlanta”