← We All Need Space, Especially Al.
It’s Always Been A Matter Of Trust →

A few days ago, the U.S. Navy announced the development of a new weapon. A very impressive new weapon that is one hundred percent accurate in downing enemy aircraft.

Here is a video of the Navy’s new laser weapon being demonstrated:

Pretty amazing, huh? If you watched the video all the way through, you probably learned something that we’ve been told is the truth, but had no way of knowing. This video is proof positive that some folks really do see a bright light right before they go. 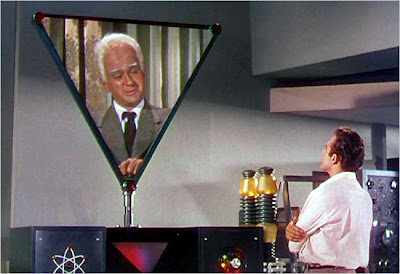 The interocitor, before the guy with the big forehead commenced to blowing things up. (image via martian drive in podcasr

Here’s something you might not know about this new laser invention. It isn’t new. It was first demonstrated in the 1955 film, This Island Earth.

Consider how great it would be to call someone on Skype, then blow up their stuff with a laser while you’ve got them on line. That’s part of what the old version of the laser weapon has over today’s naval version.

The weapon demonstrated in the film was called an interocitor and it caused destruction just like the Navy’s toy – laser beam, flames, explosion. But it doesn’t stop there. It was also used as:

The film’s star even theorizes, as he flips through the blueprints for the interocitor, that the device could construct four lane highways at a mile per minute. The interocitor seems capable of about anything.

So, Navy, nice job on your new weapon…but I’m not impressed. Call me when you’ve got a weapon that can make me some Pad Thai for lunch while I talk to Kim Jong Un and blow up his television just to make a point.

12 Comments on “Exclusive News About The Navy’s New Laser Weapon.”