← Why Does Upper Case Cursive Q Look Like A 2?
An Open Letter To McDonalds →

Leonardo da Vinci – Not That Smart

Perhaps you’ll join me in considering if Leonardo, “The Right Now Man”, was all he was cracked up to be. Let’s examine a few of his inventions.

Back in Leonardo’s day, cities had walls. When one city had a beef with the città at the other end of the strada, they’d head over and attack them. Defenders of the city under attack closed their gates and repelled the aggressors from behind the safety of the walls.

Leonardo considered the problem and came up with this: Leonardo’s “siege machine”, or, “machine for getting all our soldiers killed by the other guys.” (public domain)

It looks like a good idea. A mobile solution; steps like the rolling steps used at some airports, leading to a covered bridge/tunnel that could be lowered onto the wall of a town. Soldiers could climb the steps, then traverse the bridge in relative safety.

Do you know what rhymes with tunnel? Funnel. And that is exactly what “The Right Now Man” built…a funnel for soldiers. The tunnel was practically impregnable. The defenders had no shot at the aggressors. The tunnel/bridge conveyed the attackers safely over the wall…where the defenders could methodically kill them one by one as they emerged from the funnel-like confines of the tunnel.

da Vinci devised a parachute. It was kind of silly to spend time on that, because no one had invented an airplane or those coveralls that skydivers wear.

This renaissance parachute was made out of linen, stretched over a pyramidal wooden frame. This design has been tested during modern times, presumably by someone who wears coveralls.  Those tests proved this design works. Oh, and you have to hang by your arms until you land. (public domain)

It worked, but is it a good invention? No. Toting around a large wooden pyramid and enough fabric to cover it isn’t practical, especially if you, like Leo,  have a no shot at getting a flight out of Florence.

This idea isn’t a total loser. da Vinci’s parachute is a great way to enter a picnic. Flutter down from a cliff. Dismantle your da Vinci chute. Build a picnic table out of the pyramid frame. Use the fabric for a table-cloth and you’re ready to go.

The idea of flying fascinated da Vinci. Back in his day, birds were the only ones in the air. Our hero thought he was on their tail feathers.

One of his brainstorms was the ornithopter, which is a precursor to today’s helicopter. Here is a picture of the helicopter’s great, great-grandfather as Leonardo envisioned it: The screw-like blade was rotated by men on the platform beneath it who turned the shaft connected to that blade. Theoretically, this thing could have gotten off the ground. Of course, that theory supposes you have a dozen Olympic decathletes turning the screw. It also assumes that you’re flying it in air that has the consistency of banana pudding.

Around 1490, or for those of you who like to rhyme, two years before Columbus sailed the ocean blue, Right Now Man created a drawing to depict the ideal human proportions. That work, and the person in it are called “Vitruvian Man.” Perhaps you don’t know the name. You know the drawing:

It’s OK, if you’re into that sort of thing, but it is about as special as any of da Vinci’s other creations. How not special is it? So not special that I can now present to you my latest work of art – Vitruvian Omawarisan. 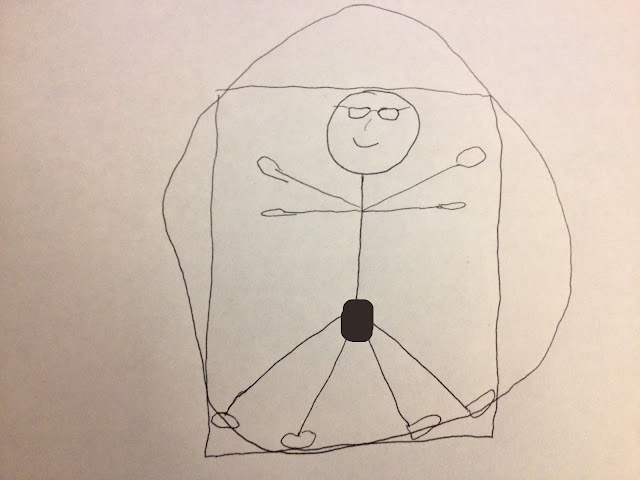 Leonardo da Vinci seems like he was all hype and no substance.

I lack substance as well.

My day will come – the day when the world declares me today’s Right Now Man.

25 Comments on “Leonardo da Vinci – Not That Smart”