← The End Of The World Didn’t Happen, Again.
Just When I Think I’m Out, They Pull Me Back In →

Recently, my wife and I were walking between stores in a shopping center and saw one of those little children’s ride machines you often see outside of stores. Instead of being shaped like a horse, a motorcycle or an airplane, this one appeared to be modeled after the main character of the children’s television series Thomas and Friends –  Thomas, The Tank Engine.

If you’re familiar with Thomas, you’ll note that this train doesn’t look as cheery as the original. In fact, I’d say that this train has some significant attitude problems. There’s no way I’d put my son on this train, and not just because he’s twenty-three years old.

I stopped to take a picture. Mrs. Omawarisan said “you’re writing about that, aren’t you?”

Unibrow. (photo by me)

Yup. I had to write to get the words “Thomas, The Resentful Tank Engine” out of my head. And you’re about to read why I don’t often do fiction…

People say I’m not myself before I get some caffeine. I knew it was a mistake to stop for coffee; I was already running late. But if there was ever a day that I needed to be myself, this was it. I took the chance, grabbed a cup and made it to the train just in time.

Looking back, I wish I’d missed that train. The doors slammed shut just after I stepped aboard and the train darted forward without warning. I wasn’t the only passenger jolted off-balance by the sudden start, but I was the only one who was wearing half of a pumpkin spice latte when he stood back up.

Yeah, I know you’re laughing. My wife raves about how great pumpkin spiced coffee is. “It’s like a taste of fall”, she says. I had to try it, just to see what she was talking about. I always thought that fall tasted like that mouth full of dried leaves I sometimes got when I jumped into a pile of raked autumn leaves as a child. All things considered, I’d rather have tasted the leaves…and I would’ve rather not been wearing pumpkin scented coffee to a job interview.

I griped to a conductor, as if he could have my suit dry cleaned for me in time. He just shook his head. “Look, I’m not making excuses, but that’s the kind of thing that happens when Thomas is the engine on this train. You’ve got to be ready for it.” It didn’t improve my situation, but I knew all about Thomas The Tank Engine; I’d learned all I needed to know about that cheery little steam locomotive when I babysat for my niece. 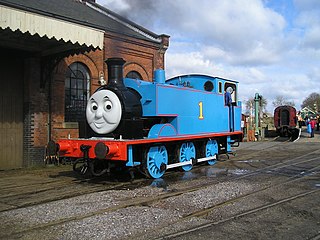 Mr. Conductor saw the glimmer of recognition in my eyes. “No, not that Thomas, this is the other Thomas”

“Uh-uh, this is a different one. Thomas, The Resentful Tank Engine is at the head of this train.” As if on cue when the conductor spoke that name, the train stopped for no apparent reason, then darted off around a curve just a bit too quickly. The ride continued that way all the way to town. We made jolting stops in places where the express usually didn’t pick up passengers and rocketed by stations full of commuters.

I climbed off the train downtown. I hoped that my answers to the interview questions would make the interviewer hand me the job despite the pumpkin scented coffee stain on my suit. On my way up the steps at the end of the platform, I turned back and looked at the locomotive. To my surprise, Thomas The Resentful Tank Engine had a face that was kind of familiar, but, in some ways, unfamiliar.

I don’t usually speak to trains, but I was upset when I barked at the engine “hey, thanks  for the “smooth” ride. I was hoping to wear my coffee to my interview this morning; I appreciate that you got it done for me.”

Thomas looked at me. “Up yours, buddy. Maybe next time you’ll buy yourself a manly cup of coffee instead of that pumpkin crap.” I did a double-take and started back down the steps. “That’s not usually what I drink; my wife loves it, I figured I’d try it.” The resentful engine rolled his eyes and smirked, “I bet your wife likes those cute shoes she bought too, but I don’t see you wearing them.”

“It doesn’t matter what I was drinking, I shouldn’t have to wear it because you have a lousy attitude.”

“Really, a lousy attitude. That’s supposed to hurt me? Bro, if you’re going to bother me, at least talk to me about something I don’t already know.”

By now, I was standing nearly face to…well, yeah, face-to-face… with the blue steam locomotive with a miserable disposition. I tried something different. “Hey, I get that you’re having a lousy day; I don’t know why you’ve got to inflict it on the rest of us”. Thomas blushed and looked down sheepishly.

“Y’know, you’re right. It’s just…I’m in such a rut. Back and forth every day from the ‘burbs to downtown…you don’t move up in the company because you do the same thing over and over.”

I felt bad for him. We all want to be something bigger, to take the next step up in our careers. I mean, I sure wanted something more; that’s why I was heading to a job interview.

“I’m sorry, I hadn’t really thought about it that way. I wish I hadn’t said anything. I hope you get the break you need soon”, I told him. He smiled back, almost as if he forgave me as I turned back toward the platform’s exit. As I reached for the hand rail, Thomas popped off again.

“Have a nice day, Pumpkin” he called out mockingly, then broke into a laugh.

He set me up. He set me up and it pissed me off. I yelled at him – “You know, you’re really miserable”.

“And you’re going to talk me out of that? You’re going to say something that’ll make me realize I should just be sweet to folks? I tell you what, why don’t you stop at the suggestion box on the way out?”

As you’d expect, the guy who showed up late for his interview wearing a stained suit didn’t get the job. I considered explaining how crossing paths with someone whose bad attitude toward his job made me late, but how do you go about explaining a conversation with a resentful locomotive without sounding a little disturbed?

My wife says I should just let it go; she claims that one day, Karma will show him the error of inflicting his bad attitude on others. She says that I shouldn’t let his resentment breed resentment in me. Maybe she’s right. He’ll get what he’s got coming to him.

But if I get the chance, I’m going to help Karma along, just a little bit. I won’t do it because I hold a grudge. At least not that I’ll admit if she asks me about it. Nope. I’ll do it because it seems like a really useful thing to do.