Posted: October 29, 2015 | Author: omawarisan | Filed under: Foolishness | Tags: comedy, do as i say not as i do, dogs, humor, hypocrisy, politics, postaweek, religion |2 Comments 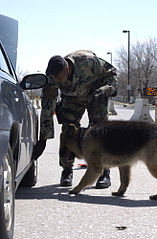 As we accelerated, the dog’s head popped through the open window. His ears flopped in the wind. He barked at cars in the oncoming lane. He didn’t miss any; each car got its own bark.

Proof That I Think Too Much

At first I thought “yeah, we’d have to change that. That barking would get old fast.”

But I soon reconsidered.

Dogs and cars, ever since your grandpappy was a kid. (image, public domain)

“This dog has taken his car chasing to a new level”, I thought. “It’d be wrong to train it out of him.”

Initiative is a rare thing, in people or in dogs. Destroying this dog’s initiative to innovate upon the car chasing work done by generations of his ancestors would be unethical.

Dogs have chased cars since Henry Ford’s day. I don’t think they’ve ever caught one or established what one of them would do if they actually cornered a car. I don’t think they chase maliciously. I’ve assumed dogs chase cars because they feel left out of the fun when they aren’t riding. I still think that’s the truth for most pups. As I said, my problem is with this individual.

Hypocrisy. Uncool, Even With A Wagging Tail

Unfortunately for this dog, ethics coming into the conversation was his undoing. He was barking at other cars, trying to discourage their drivers and even other dogs who, like him, were fortunate enough to be invited along for a ride. If it was alright for him to be in a car, why did he believe that it wasn’t for anyone else?

Low order creatures like politicians and religious figures usually trade in that kind of “do as I say, not as I do” logic; it has no place with the rest of us or our canine pals.

Normally, I value being in the presence of uniqueness. The first of anything is usually pretty cool. There’s nothing cool about a hypocrite, even the first ever hypocritical dog.