That’s not all that you do for me. I get good deals on donuts when I get together with my old man friends every morning. And when I travel, I get a break on hotel costs. You offer me insurance and I get a magazine every month. It almost seems like a one-sided deal that is in my favor. If you’re OK with that, so am I. END_OF_DOCUMENT_TOKEN_TO_BE_REPLACED

Your Nana Called. She Wants Lysol.

The caller left a message; that’s not the kind of thing that telemarketers or people who’ve mis-dialed do. Concerned, I listened to the message:

Pee Wee, this is Nana. Do you hear me? OK, I don’t know when you’re coming, but bring me some Lysol when you come.

There was a long pause, then a voice in the background asked Nana if “he” (presumably Pee Wee) was saying anything. Nana told her he was not and then she hung up.

I’m Not Most Folks

Most folks would get a chuckle out of this message and let it pass without a second thought. I am not most folks.

For the record, not only am I not most folks, I am also not Nana’s Pee Wee.  I am no one’s Pee Wee. I’ve never been called Pee Wee and take a measure of pride in that fact. At my age, I certainly have no intention of adding Pee Wee to the list of approved nicknames for me and I don’t have a Nana. END_OF_DOCUMENT_TOKEN_TO_BE_REPLACED

Now, I think I already established that I’m a bit older. No one is going to mistake me for a twenty-one year old. I understand the liability issues that force stores to confirm that every one who buys a bottle of wine is over twenty-one; I just happen to believe there is room for common sense in that confirmation process. END_OF_DOCUMENT_TOKEN_TO_BE_REPLACED 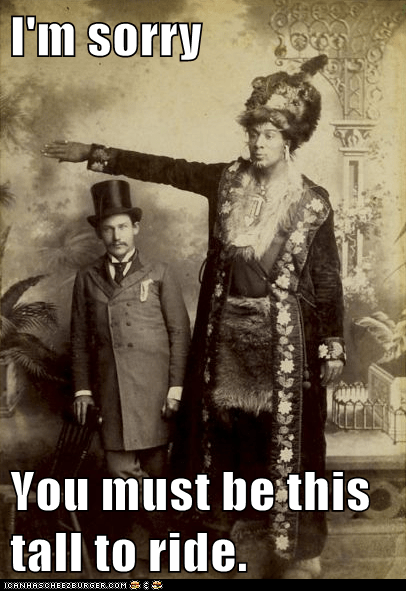 Maybe soon I will be (image via Icanhazcheezeburger.com)

Some time ago…well, I’m 52 so…a very long time ago, I used to gripe to my mother about being in pain. I didn’t have a good reason for it, but my arm or my leg hurt. Mom just dismissed my complaints as growing pains.

Growing pains were a very appealing explanation to eight year old me. I wanted to grow, but it was hard to know when I actually was growing. I wanted results. We tried the marks on the door frame thing to track my increasing height. Unfortunately, when we moved to a new town those marks didn’t move with us. That made those growing pains the only readily available (if inaccurate) sign I had that I was growing.

As I got older, I still had parts that hurt. I could connect those pains with injuries – I’d fallen off a bike, twisted something when I was horse-playing with friends. When I worked in policing I could remember why things were sore. My shoulder was sore from helping carry a 450 lb man down some stairs. My hip was tender after being hit by a thrown television. A lot of things were sore when I was hit by a car. END_OF_DOCUMENT_TOKEN_TO_BE_REPLACED

I meet a lot of people who complain about getting older. That’s their right, I suppose. You’ll not hear me whine about aging. When a person stops aging, they don’t get much else done. I’ve got too much on my plate right now to stop aging.

Getting older has meant a lot of change for me. My solar sex panel is expanding. A lot of people call me sir. That used to happen at work because of my rank, now it’s because I’m an antique. A kid is now defined as someone under 28. I’m starting to get senior discounts. The ads that are targeted toward me are changing too.

END_OF_DOCUMENT_TOKEN_TO_BE_REPLACED

Lots of people say it. They’ll say it to my face. I’ve gotten it at work, I’ve heard it at home. My friends have told me.

I’ve denied it. Without exception, every time they’ve said it, I have said it isn’t true. Perhaps I knew it was so. Maybe I just didn’t want to believe it could be true. I denied it. I ignored the pressure within; the pressure that told me it was true.

Perhaps it’s just that it sounds harsh. Even when people laugh while they’re saying it, even when the context is friendly, it sounds harsh. I didn’t want that. It’d be awful if it were true, so it couldn’t be. END_OF_DOCUMENT_TOKEN_TO_BE_REPLACED

The Wolf Finds The Sheepdog

Newer readers – this is one you might need some context on. You can get that context here…and here.

The Wolf was a block and a half away when I turned toward the coffee shop. There’s a sunny spot on the street where I see him on cool mornings. That’s where he was, sitting on his walker, soaking up a little extra warmth.

I make a point of not driving up to him in a police car when I spot him. Back in the day, me pulling up in a police car was often the start of a bad evening for at least one of us. It just works out better now to let him come around on his own.

When I walked out of the shop with my hot chocolate (with blackberry syrup, trust me on this one) he was out near the driveway. “Good morning, Sarge, God bless you.” I returned the blessing and he turned back toward the street.

I walked toward him. As I got close I spoke quietly – “coming up behind you.”  He laughed and asked why I didn’t warn him like that twenty years ago. “You know damned well why I didn’t” I said. He grinned and admitted that he did. END_OF_DOCUMENT_TOKEN_TO_BE_REPLACED

I haven’t seen you in forever, what’s up man? END_OF_DOCUMENT_TOKEN_TO_BE_REPLACED