The Jolie Pez Project: The Jolie Goes To The Outer Banks

The Jolie recently returned from a Caribbean adventure (to be published later). Before she heads off to Europe, she decided to take in a few sights on the North Carolina Outer Banks.

The Jolie arrived in Manteo, on Roanoke Island, late on July 3. She’d heard another celebrity lived on the island. Sadly, North Carolina’s favorite son, Andy Griffith had passed away that morning. The Jolie was sad. She was sadder still that her Botox would not let her face express the sorrow she felt.

Everyone else on the island was appropriately sad at the loss of a good man. 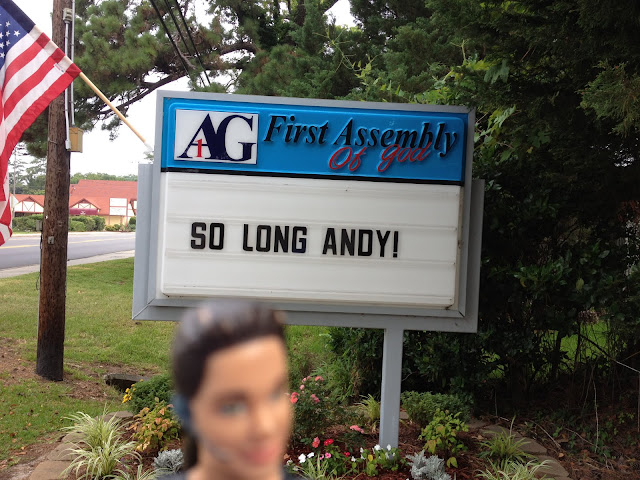 The Outer Banks is home to the site of the world’s first powered flight. She wandered around behind the memorial to the Wright Brothers and found them still hanging around back there. The Jolie wanted first class seating on this flight, and she told herself she had it because she was in front. 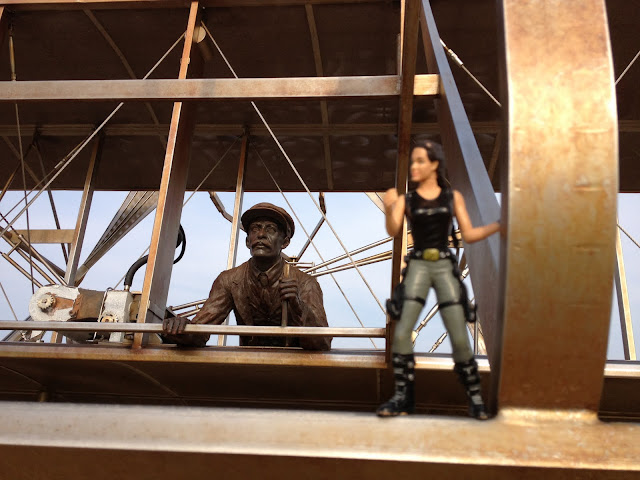 END_OF_DOCUMENT_TOKEN_TO_BE_REPLACED

The other day I went to vote.  Early voting for my neighborhood is held at the local library.

I pulled into the parking lot and got out of my car. Nearby, a woman was putting her books in the back of her minivan. Her little boy stood outside the open back door. As I walked past them toward the library door, the little boy pointed at me and said “Mom, that’s a different guy”. I figured I’d just let the remark pass, but the kid wouldn’t let it go. He kept telling his mother I was different. Looking to her for an answer didn’t help, she just shrugged.

Discomfort seized me. I went into the library restroom to try to determine what made the boy so insistent that I was different. I didn’t have Alfalfa hair and there was nothing sticking out of my nose. My fly was up and I wasn’t wearing anything outlandish.

I’m not sure what made that mean four year old label me as different. I am sure I didn’t relish being too different. END_OF_DOCUMENT_TOKEN_TO_BE_REPLACED

An Open Letter To The Woman In Seat 12-A

For those about to rock...(Image via Wikipedia)

I thought that I would take some time to let you know how much I admire your ambitious parenting. I’m so happy that I could not get home on a direct flight. If I had not connected though Detroit I would never have learned that you and your son lived here in North Carolina. Since I didn’t get either of your names, let’s call your son 12-B, shall we?

You, 12-A, are a visionary. Not many parents see the wisdom in pushing their child to learn to play the pipe organ. Sure, there are a few, because cathedrals get these people from somewhere, right? But I don’t imagine there are any who have hit on your unique style of teaching him the instrument by forcing him during a plane trip to repeatedly watch You Tube videos of organists.

We both know the market for pipe organ players is huge right now. Almost every cathedral I drive by has a sign out hanging from one of the gargoyles out front that says : Help Wanted – Organist. You’re a visionary, I see that. END_OF_DOCUMENT_TOKEN_TO_BE_REPLACED

I’ll open with a question.

Have you ever had someone tell you a story about a bad park ranger? We’ve all heard tales of a bad cop, a shady attorney or a doctor who cut corners.  All those honorable occupations have their sad exceptions, but I’ve never heard anyone say “I just haven’t trusted park rangers since that day”.

Rangers are full of enthusiasm about the things we all want to see. They work tirelessly to protect those landmarks and treasures. They’re always polite, friendly and helpful. So why don’t people listen to them?

The Ranger At Cape Hatteras

Last week, the Omawari-son and I climbed the Cape Hatteras Lighthouse. The National Park Service Rangers there were great.

They were ready with information on the lighthouse itself and on how to climb its spiraling, 248 step staircase. Just before a group is admitted to walk up the stairs, a Ranger gathers them for a little talk that mixes facts about the lighthouse with some safety tips. The talk goes sort of like this: END_OF_DOCUMENT_TOKEN_TO_BE_REPLACED

Go On, Mock The Guy Wearing The Hot Dog Suit. He Thinks You’re Doing It Anyhow

There was a time when I really wasn’t  putting the effort into school that I ought to have been. My parents never gave up on getting me to bring that effort forth. They kept trying until they found the right combination of words and action that would get me started on the path to being the productive, mortgage paying adult that I am.

One day last week, the owner of a pizza place near my house sent one of his employees outside to promote that hot dogs were now on his menu. The employee had on a hot dog costume. There was a hole in the hot dog that allowed the face of the person wearing the costume to be the only part of him that was visible. END_OF_DOCUMENT_TOKEN_TO_BE_REPLACED

An Onion In A Parking Lot

Early yesterday morning, I was driving when I got an important call. Knowing that this call was one that was going to require me to make a few notes to myself, I looked for a spot to pull over. I spotted a church parking lot just in time to make the turn and pulled in. It was early enough that the whole lot was deserted.

I looked around while I was on my call. There, a few spaces away, was an onion. Nothing else. Just an onion in a parking space. END_OF_DOCUMENT_TOKEN_TO_BE_REPLACED

That is kind of nice, because you certainly want be able schedule your activities and maybe get a pizza delivered in time.  If you order pizza, consider really tipping the delivery person an outrageous amount, at least $400. It will make what’s left of their day, and you’re not really losing anything by doing it.

Also, if I am thinking correctly given this time zone thing, the end of the world will be moving east to west. This is really going to be helpful for those who live on or are visiting the east coast of the Americas. Folks there should be able to see it coming across the water. West Coast people won’t be as lucky. Those folks will have to wait for the end to clear the mountain ranges, so it wont be as visually impressive. END_OF_DOCUMENT_TOKEN_TO_BE_REPLACED

Spring Is Here. It Could Be Worse. I Could Be A Bee.

If you've seen these commercials, is this bee supposed to be French or Spanish? His accent changes. I hate him. (Image by spike55151 via Flickr)

If I were a bee, you and I would get along just fine.

I’m not prone to getting overly excited about things. Under the circumstance of being a bee, I’d probably make an additional effort to be cool-headed about whatever went on around me. After all, I’d have enough peers who were ready to fly off the handle at any provocation. There are plenty of bees zipping around out there with a chip on their shoulder.

No one really wins when someone carries around that kind of bad attitude. Interests clash, someone ends up stung. The other party flies off, without a stinger, to spend their last few moments regretting having lost their temper.

I’d be the kind of bee you’d like to have around, unless you’re of the mindset that I’m responsible for flying around and pollinating plants so you’ll have stuff to eat. END_OF_DOCUMENT_TOKEN_TO_BE_REPLACED