I also believe that medical folks, especially nurses, are special people worthy of exceptional respect. And it is important to be kind to people who are going to sedate you and poke you with sharp stuff. So when I went to the hospital yesterday for surgery, I was very nice to everyone. END_OF_DOCUMENT_TOKEN_TO_BE_REPLACED

Back before Christmas, I had that surgery I’ve written so much about. It was good. I went in hurting, I came out completely pain-free. 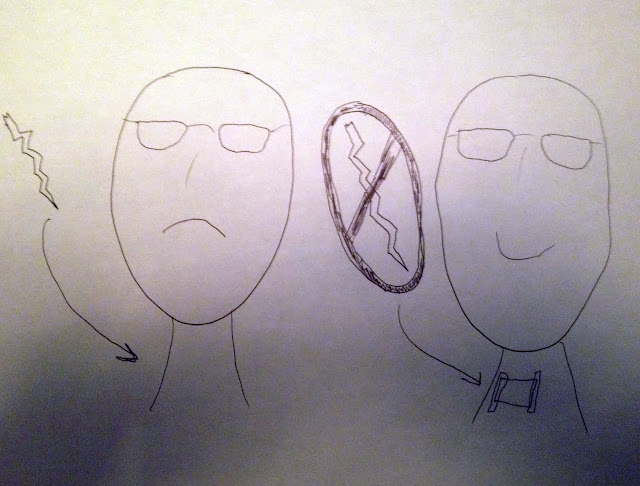 I did end up with a giant bandage on the side of my neck, but that was a small price to pay for the relief. The bandage came with strict instructions – do not take the bandage off, do not get the bandage wet. They really didn’t mention why those things were so important. The instructions were very specific though, so I figured out that the consequence might be pretty severe. END_OF_DOCUMENT_TOKEN_TO_BE_REPLACED

That Little Hop At The End I have a CD that starts with Lou Reed playing the introduction of one of his better known songs, Sweet Jane. He plays the bit of music as a bit of self-deprecating humor to show new bands how to build a career (as, in his words, he did) around three chords. He then reveals that the three chord introduction to Sweet Jane actually contains a subtle fourth chord and follows it by pointing out that “like a lot of other things in life, it’s that little hop at the end.”

I like the idea of “the little hop at the end”. To me, it gives a name to that little something extra that we all give to make something a special effort. I try to make it a point to thank people who give a hop, but this week I was thwarted in my efforts.

END_OF_DOCUMENT_TOKEN_TO_BE_REPLACED

Five Routine Minutes: The Urine Sample Lady Does Not Like Jokes

The countdown is on. I check in for surgery at 4am this coming Tuesday. If all goes according to plan, by noon I will have a piece of donated bone and a titanium plate in my neck. I’ll get rid of some pain and some bone spurs that are injuring my spinal cord. All in all, I’m planning on Tuesday being a good day.

There is a lot of preparation that goes into doing surgery on someone’s spinal column. To speed the process, I got an appointment to go to the hospital this week and take care of some of the preliminary questions and tests.

I arrived for my pre-surgical appointment early. Sadly, that meant I had to sit in the waiting room and watch Dr. Phil. Dr. Phil is such a hack. I’m not sure why they felt that I deserved to suffer through that. 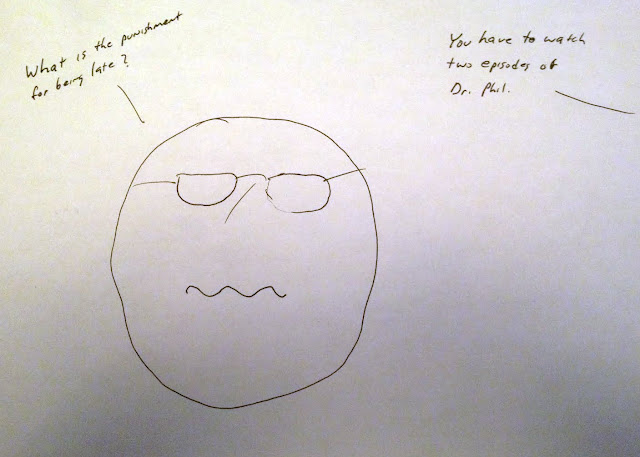 END_OF_DOCUMENT_TOKEN_TO_BE_REPLACED

As you might guess, I have my upcoming surgery on my mind. Not the boss of me. (image via wikimedia)

I’m not terribly concerned about the actual surgery. I understand what is going to happen. The reasons for the surgery and the expected results are clear. Everything is going to be fine.

It is even kind of nice that I’ll get a few weeks away from work. That hasn’t happened since I was fifteen. There will be no alarm clock bossing me around. I’ll have three weeks to write.

Becoming pain-free. Having free time. Time to see if I can actually do what I dream about doing with words. What’s not to like?

I Can’t Go Out And Play

After my two days in the hospital, I’ll go home. I will stay there. And stay. And stay. I will stay home for three weeks. Unable to leave. Unable to drive. Not allowed to ride in a car. I’ll be grounded. I’ll be on house arrest. I can go anywhere I can walk. There aren’t many places I can go on foot from my house. END_OF_DOCUMENT_TOKEN_TO_BE_REPLACED

Well, How Did I Get Here?

It was literally a pain in the neck that got my attention. Yes, a pain in the neck always gets our attention and our ire; I’m trying to say that my neck hurt, a lot. Naturally, I ignored it. Why would I ignore such a thing? Because I am a man. That sort of behavior comes with the y chromosome.

Like people who are pains in the neck, the pain that was in my neck eventually became something I could not ignore. I was due for a physical, so I got an appointment to see my doctor. I thought I’d tell him about my neck while he was doing all the testing and maintenance work on me. I was sure he’d know what to do. He did. He referred me to a specialist.