← Five Routine Minutes: Was It The Old Switcheroo?
Hey Costco →

Let’s review. My last post brought up something kind of silly that I saw while shopping at Costco: 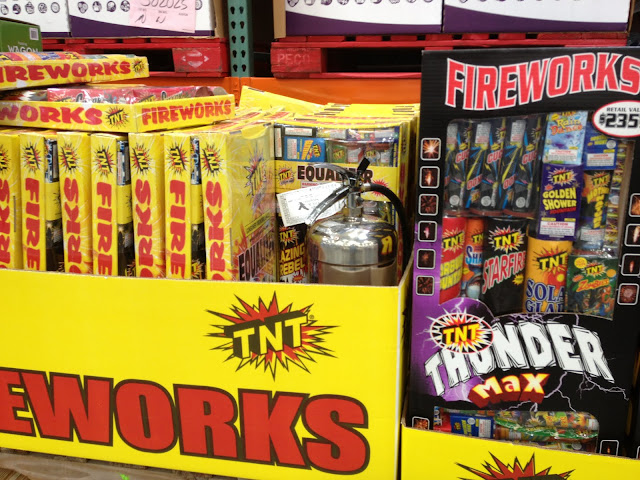 I took that picture on Wednesday.

On Friday I was back at Costco. There had been a huge battle at home between me and a big tub of blueberries. I won, despite being outnumbered. So, I was off to the big warehouse store to pick up more berries.

Who am I kidding? Buying blueberries was a pretext to see if the extinguisher was still in the box.

Here is the picture I took Friday: 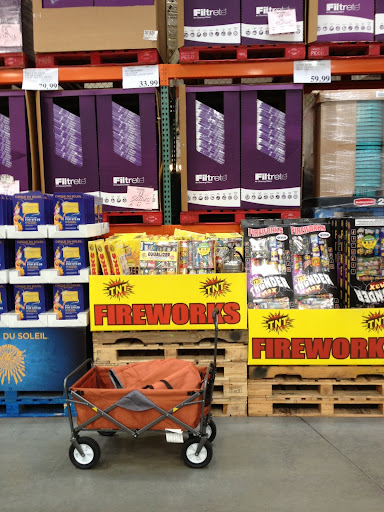 Amazing. The fireworks are starting to sell. But no one at Costco had looked at this and thought “y’know, is that a good idea?”

So I did what any other responsible citizen would do. I took a picture so I’d have something to write about on my blog, then I went and bought some blueberries and a case of fruit flavored seltzer water.

I considered my ethical obligation while I waited in the check out line. Was the best course of action to say something about this to the management in the interest of public safety? Or, would it be more correct to see if anyone figured it out and have fun with whatever happens?

In the end, my instinct to look after folks kicked in. I stopped at the service desk.

A nice woman offered to help me and I described what I’d seen. She looked at me, questioningly. So I turned it up a notch. I described the folly of the co-located extinguisher and fireworks. With waving arms, I poured out a depiction of the Armageddon that could issue from that box if the worst did happen. When I closed with “I’m certainly not tough enough to go get that extinguisher out of the fire, are you?”, horror crossed her face and a light bulb came on over her head.

I am a communicator, my friends. This communicator strutted out of the store. My work was complete.

Then came this morning.

A text message arrived from the Empress Of Costco, the Duchess Of Discount, the Baroness of Buying In Bulk. The Empress loves the big warehouse store and everything about it. She knows and greets the employees in her local store by name. When she does not appear at that store as scheduled, Costco notifies the authorities and the police are dispatched to her home to ensure there has not been a tragedy.

Here is the photo she sent: 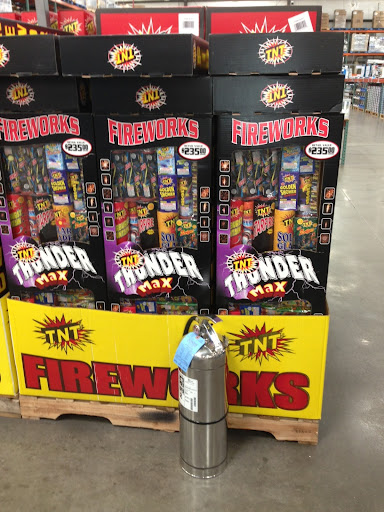 Yes, this is a different store, in a distant state. Compare the inspection tags on the fire extinguisher.

Same company, in a store hundreds of miles from mine. Same fireworks. Same fire extinguisher. Nearly the same circumstance.

Let me be fair. The extinguisher is outside the box, but no one is going to grab it if the box is burning.

In The Interest Of Safety, A For Instance

Costco likely has a policy that if a store sells fireworks an extinguisher will be as accessible as the merchandise. Perhaps these photos are an example of the most extreme interpretation of that policy. Extreme, and extremely not smart.

Not smart, but we have at least two places where this is how this product and this device are placed. In the interest of making sure all who sell fireworks are aware of how silly it is to put your fire extinguisher in or next to your merchandise, I’ve created this fictional cowboy tale:

The doors flew open and our white hatted hero, The Sheriff, strode confidently into the Greasy Gulch Saloon. There, in the corner, was his quarry.

Black Bart lifted his black hat and eyed The Sheriff. “I done told you, I ain’t goin’ to jail. It’s fixin’ to be you or me”, he said. The Sheriff nodded, turned and walked back toward the door. He knew Bart would follow. The men were bound by the code of the west to settle the matter with a gun fight on the dusty street.

Bart spat out his plug of tobacco as he hit the door. The barkeep shook his head and thought “nice, someone’s got to clean that up y’know.” He hoped against hope that the lawman would make sure this was the last time he cleaned up after Black Bart.

The Sheriff watched Bart walk out and stop, facing him from about twenty feet away. The townsfolk were nervous about the outcome of the duel. The tension built. The opponents stared each other down. Then, it happened.

“Time out!” called the Sheriff. Bart relaxed slightly and cocked his head. Like the rest of the people who were there that day, he’d never seen anyone call time in a shoot out. He said it again, “Time out, Bart!”, the lawman said as he walked toward the villain. Bart watched warily as The Sheriff approached, with his hands in the air to assure him that he was not moving up for a closer shot.

When the men drew face to face, The Sheriff smiled and said “Bart, I want to show you the gun I aim to kill you with.” He slowly lowered one hand to his pearl handled six-shooter and removed it from its holster. Turning the grip so it faced Bart, The Sheriff allowed the desperado to hold the pistol.

Bart held the gun and the Sheriff backed up the street to where he’d stood before calling time. The stare down started anew. The man in the white hat called out, cheerily, “OK, time in!”

Just before the shot rang out, the barkeep shook his head. “Someone’s got to clean that up. I s’pose I’m still that someone.”

Costco, if you’re getting this, don’t hand your gun to Bart. Put the extinguisher somewhere over there. Not way over there, just over there enough to be practical.

Thanks. And thanks again for all the blueberries.